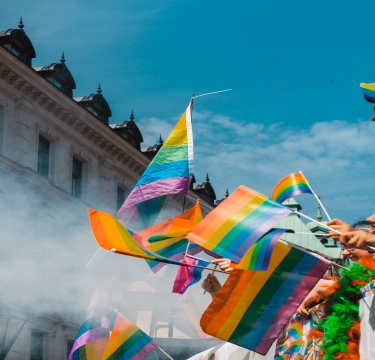 The great gender debate: an interview with expert Sigi Lieb

Since January 2022 UNIQA has had guidelines for gender-fair and inclusive communication, developed in a cross-departmental project. The project team received valuable support from Sigi Lieb. In an interview, the expert on gender and diversity has told us why the topic of 'gender' is so polarising in German-speaking countries, how critical people can be persuaded, and how she deals with opposition.

A provocative question to start with: Does 'gendering' really ensure equality or is it an artificial problem constructed by a minority?

Gender-appropriate language alone does not create equality but it is part of the bigger picture. How I talk doesn't change the payslip or executive distribution. But language is an expression of our thinking and creates ideas that later lead to actions. When we talk about men, we trigger images of men. Women or non-binary people do not, or only rarely do, appear. But what is not contemplated is in turn forgotten when it is time to act. Language is powerful and our most important tool for communication. It praises and insults, motivates and frustrates, is factual or emotional. Language can build bridges or dig ditches, and it is up to us how we use this tool.

As for the second part of the question: women are not a minority. Together with non-binary people we even have a majority. In addition, the right to non-discrimination is an individual right and every person is entitled to it. After all we don't say: 'Only a minority needs walking-frames. So why do we need easy-access pavements?'

Gender equitable language has its beginnings in the 1960s and 1970s. Why is the topic still polarising the German-speaking world so strongly?

Language is something very personal. We all use it and are easily offended when our use of language is criticised. How we understand and use language is shaped by habits that we are often unaware of. Discrimination that does not affect ourselves is not so easy for us to notice. Inclusive language creates awareness of the need to use language as a tool with care.

Only in the last few years has it slowly become clear that there are other genders and gender identities besides male and female. The constitutional bodies in Austria and Germany have confirmed the non-binary civil status as a positive addition.

There is also another area of responsibility today: decisions are increasingly being made not by people but by artificial intelligence, or AI for short. However, AI cannot differentiate between generic and specific, so it does not know whether a masculine term refers to only a man, or other people as well. It takes words completely at face value, and so generic masculine nouns lead to de facto discrimination against non-males. All our prejudices, stereotypes and also grammatical distortions end up in the algorithms and lead to really discriminatory decisions. In my understanding, this knowledge places a special responsibility on us to be careful with the images and texts that end up in the digital space.

Sigi Lieb is a communication professional with a focus on mindset, language and communication. The certified social economist advises and accompanies businesses in corporate communication, personnel development and organisational development. Lieb is also a trained radio and TV journalist, certified PR consultant and teacher of German as a target language.

How can you bring the topic closer to people who are critical of gender-appropriate language?

Very few people are radical opponents of gender-fair language. Many are unsure, do not understand why or how to implement it.

Statements with 'I feel...' or 'my opinion is...' are subjective and cannot be measured objectively. It doesn't get us anywhere trying to tell others how to feel or think.

However, the impact of language can be measured objectively and scientifically. We can for example track what images are triggered by specific linguistic concepts, and how long it takes to react. The results show us that the generic masculine hinders us from overcoming gender stereotypes.

But that doesn't mean everyone has to use colons (as in the German :in to mark both genders of a word) or asterisks all the time. There are many other ways to express yourself gender-appropriately.

There are still no uniform rules. Would enforced guidelines help to increase acceptance?

Language belongs to all of us. We all use it every day and it's very personal. That's why we often react so emotionally. I am against language compulsion and against dogmas. There is no normative tradition in the German-speaking world, i.e. no authority that tells the 'people' how to write. We develop our language together through usage. The Council for German Orthography also has no normative competence – they observe the use of language and carefully develop the rules as they go.

It's different with French, at least in theory. There, the Académie Française tries to dictate how French should be spoken. But that doesn't stop people in Paris, Brussels or Quebec from creating their own new words and sentence constructs, including gender-neutral alternatives and neopronouns for non-binary people, as well as all-inclusive terms.

As you just mentioned with regard to France, the debate about gender-fair language does not only exist in German-speaking countries. How do other countries deal with it?

The issue is relevant in countries where women and minorities have gained a voice in recent years, and where anti-discrimination and equality movements are thriving. However, the complexity depends on the respective language.

We can divide languages ​​into three categories: 'Genderless languages', such as Hungarian or Finnish, have no grammatical gender markers. In the 'natural gendered languages', which include English and the Scandinavian languages, most nouns have no gender marking. The few nouns with a marker have by now been neutralized. For example, in English, fireman has become firefighter, and policeman has been changed to police officer. However, the pronouns have gender markers. Here the old singular 'they' from Shakespeare's time has been reactivated in English. Swedish has the neopronoun 'hen' for neutral applications. The third category, to which German, the Romance and Slavic languages ​​belong, are the 'highly gendered languages'. This means that gender is deeply embedded in the grammar in these languages. For example, the phrase 'everybody celebrate together' is different in Spanish, whether it’s about women (Todas celebran juntas.) or about men (Todos celebran juntos.). But here too there are efforts to make the language more neutral (Todes celbran juntes.).

I am pleased that language is currently receiving so much attention because, though it is only one piece of the puzzle among many, it is everywhere, every day, used by everyone.

What are the limitations of gender-neutral language?

Today I deal with language differently and with greater courage than I did a few years ago. Basically, I make sure I express myself in a gender-appropriate manner without irritating others. This means that I adapt my language to the context and my target group. In a conservative environment, I tend to use both names when I have the feeling that the audible Genderpause – a tiny pause before adding the second gendered ending – is too irritating. In a progressive environment, on the other hand, I often make sure that non-binary people are always visible, for example by using the Genderpause. Communication is a process and I want to be understood.

How long do you think it will take for society to get used to gender-sensitive language?

I can't look into the future, but I can look back. Three years ago, the topic was of no interest to most companies. A lot has changed since then. However, our language will develop as long as we use it.

I am pleased that language is currently receiving so much attention because, though it is only one piece of the puzzle among many, it is everywhere, every day, used by everyone. Of course, structural changes do not only require words but also deeds, and the future will tell to what extent language plays a part in influencing decisions. It is important that people of all genders, skin colours and levels of education feel comfortable with it.

non-binary: People who do not identify exclusively as male or female, i.e. who are outside of the two-part, binary gender order.

Entry in the civil registry: In 2018, the Austrian Constitutional Court (VfGH) recognised the right of intersex people to register their individual gender identity in the central civil status register. Accordingly, there are six options for gender entry: female, male, inter, diverse, open, no information.

Rechtschreibrat (officially: The Council for German Orthography): central authority in matters of spelling in German. Among its tasks are the observation and further development of German spelling, the preservation of the uniformity of spelling in the German-speaking areas as well as the clarification of doubtful cases of spelling.

Beidnennung: In the case of 'Beidnennung' [loosely translated: 'both-mentioned', or also 'paired-forms'] both the feminine and the masculine form is written in full ('Mitarbeiterinnen' [feminine] and 'Mitarbeiter' [masculine] – 'employees' in English). However, they exclude non-binary people.

Genderpause: In order to include all genders in spoken language, we have to speak the gender pause with a form of glottal stop. When pronouncing terms such as 'Kolleg:innen', a short pause is made to mark the colon.

What steps does UNIQA take towards more equality.

UNIQA on the way to more diversity

How we create a company culture that promotes diversity.

The role of green business management within UNIQA’s sustainability strategy.